TUC's inaugural Superbowl Tournament has been run and won. Three teams faced off in three continuous speedpoint rounds that saw them play 6 games each. A very spirited affair that brought lots of new people together from across the TUC leagues. After the tournament, players were invited out to enjoy some food and drink deals and catch the last few minutes of the game at The Twisted Kilt.

In true Superbowl fashion, the Baltimore Ravens proved too strong for the San Fran 49ers, winning all their match ups and going 3-0 against the 49ers. The 49ers got closer and closer each game but couldn't managed to close the gap on the Ravens past two points in their final game. But even Baltimore was no match for the undefeated team of the night, The Replacement Refs. An unstoppable foreign force called in to make the worst decisions ever and get away with it. The Replacement Refs worst game was a 16-15 win in the first round. From there on they only increased their dominance to finish the night with a 9-0 record. 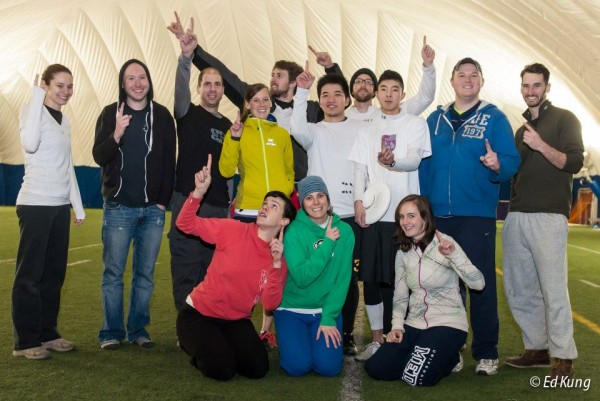 At the end of the night, a male and a female MVP from each team were voted for by all of their opponents. 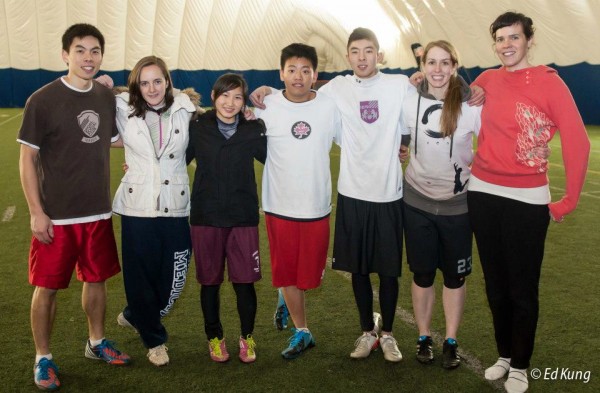 Double Disc Court and The Superbowl

On the other side of the field, during their rotation off, teams could sit down and watch a live projected steam of the Superbowl. Or, try their hand in a mini DDC tournament. The participation in what was a new sport for everyone was high and it was enjoyed by all who tried it. The court was never seen empty.

Congratulations to Shawn Huynh and Neil Duchen for remaining undefeated and winning the DDC final, 21-10. 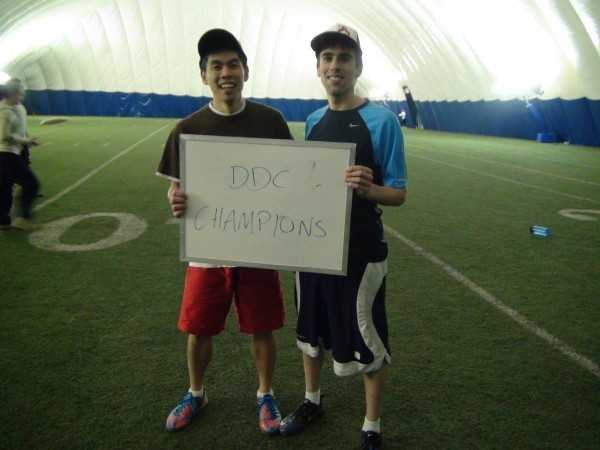 Special thank you to Monica Taylor and Ryan Marciniak for helping the event run smoothly on the night.

For the first time, TUC is hosting a Superbowl themed mini-tournament for those who aren’t a fan of football, or for those who are, but love ultimate just that little bit more… On February 3rd at UCC, come and get your double dose of ultimate and football as you play whilst we project a live stream of the game inside the dome!

On Superbowl night, Upper Canada College will be home to TUC and the Superbowl as we project a live stream of the championship game inside the dome during the tournament. The tournament itself will be three teams in a 6 on 6 king of the hill format. Behind one of the endzones, in the extra space, there will be a viewing area and Double Disc Court(DDC). For the third team who is rotating off, they have the choice of watching the Superbowl or entering into the mini DDC tournament. For those of you who have never played DDC, it is a fun 2on2 close quarters, alternative disc sport. We will be playing a smaller version with approx. 5m x 5m boxes instead of the full size 13m x 13m. There will be prizes for the champions of DDC and MVP’s of the Superbowl.

As there is a no food or alcohol policy inside the dome, we will head to The Twisted Kilt after the action. The Twisted Kilt has offered to open up their upstairs room for us and give us a deal of Nachos and a Pitcher for $22. They are located at 1954 Yonge Street - just one block north of Davisville Station on the west side, opposite Millwood Rd. Non-tournament players welcome!

Juniors are welcome at this event as long as they comply with the TUC Juniors Participation Policy and complete and submit a Responsible Adult Form.

Teams will be posted on the day at UCC.