TUC played host to the Toronto segment of the The Art Hawkins Great Canadian Ultimate Game, the longest game of Ultimate ever held in Canada. A 1 hour game segment was held in Toronto at Winston Churchill Reservoir, on Saturday, June 16th from 1-2pm.

28 different Canadian cities each held a game segment one after another, while the score was passed along across the nation. Players competing in the event worked to raise funds for charity, with players on the Red team representing Ultimate Peace, while players on the White team represent the Boys & Girls Club of Canada.

It was the Red team holding a sizable advantage of 7 points when the game was passed to us from Kingston and after an exciting hour of play red increased the gap to 8 points, as we sent our score onwards to Parry Sound. Upon leaving Toronto, the actual game score was 143-135 for Red. When all was said and done and the final stage was held in Victoria, BC team White had worked their way back into the lead and held on for a narrow 288-285 victory. Congratulations to all participating communities. 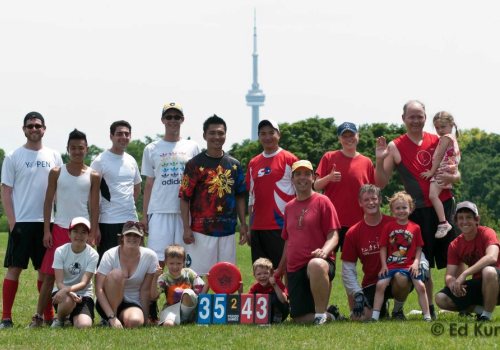 Ultimate Peace builds bridges of friendship and understanding for youth from different social and cultural backgrounds in conflict zones around the world. They focus on competitive play, relationship building and cultural exchange.

BGCC's mission is to provide a safe and supportive place where children and youth can expeience new opportunities, overcome barriers, build positive relationships and develop confidence skills for life.