History of Co-ed Touring in Toronto

The Canadian Ultimate Championships (CUC, aka Nationals) didn't add a Mixed (aka Co-ed) division until 1999, so you might think that's where the story starts. For the most part that's true, but there are a couple of exceptions worth noting.

In 1994, a new team called Hood joined the TUC league. Over the next few years, they were very successful, under a succession of names. Calling themselves Mon Ami Burundi at the time, they also attended the UPA Championships (held every fall in the United States) in 1998 (the first year for the Mixed division there) and 1999, placing 4th and 5th respectively. Following 1999, the league team split up, but MAB reformed in 2002 to go to Nationals, where they secured a silver medal. In 2003, once again renamed, Black Sheep returned to Nationals, but lost in the quarter-finals, ultimately finishing 5th. This would be Black Sheep's last year, though some players re-appeared on the Bombing Madd Fatties roster in 2004.

lmno joined TUC in 1995, but soon began going to out-of-town tournaments, continuing to do so up to about 2000. To this author's knowledge, they are among the first from Toronto to travel so regularly and so far, attending tournaments as distant as Potlatch (Redmond, WA). They never went to CUC or the UPA Championships, though they did attend Co-ed Celebration (the de-facto US championships, prior to the Mixed category being added there in 1998). lmno also lays claim to a tradition near and dear to the hearts of many Toronto players. Alan Lepofsky recalls:

“lmno was the innovator of the campsite games tradition at Gender Blender. The first year we created "lmno-land", complete with cotton candy machine and air hockey. People loved it and that's what led to the Friday night insanity that we now all know and love.”

Toronto's Mixed touring seems to see more churn in teams than the Open and Women's divisions. Maybe it's easier to form a Mixed team, maybe it's harder to keep a Mixed team together, maybe people in Mixed put more emphasis on playing with their friends and the competitive drive isn't as strong a motivator. Whatever the reasons, this churn was perhaps most obvious between 1999 and 2002.

Exponential growth in the league had led to a boom in the number of Open teams from 1994-99, but the addition of the Mixed division to Nationals in 1999 diverted that growth into a new arena. Thrive came together for the inaugural Mixed competition, and brought home silver. Thrive dropped to 10th in 2000, and dissolved after that. 2000 also saw a new team, Nine Inch Ales, who captured the bronze. Nine Inch Ales followed Thrive's lead, dropping from a medal finish in their first year to 16th in 2001. Of course, another new team formed in 2001. Mo' finished 7th and, true to the Toronto pattern to date, dropped to 10th in 2002, when yet another new team, Skunk, formed and finished ahead of them, narrowly missing the podium with a 4th place finish (this was the year MAB won silver). Mo' also attended the World Ultimate Club Championships (WUCC) in 2002.

“From Mo', Lori Bristow and myself are the only members that made it all the way down to Big Hammers this year, and Dilhan Kuru is the only remaining member from Skunk.”

Mars Meets Venus was formed in 2003. In 2004, some of the regulars from MMV wanted to step it up a notch (not coincidentally, these were most of the higher-skilled players). Zen Asylum was formed with goals of being more competitive, while MMV carried on. Over the years, MMV has typically been a team with strong leadership, which would welcome and teach those that want an introduction to touring without making the commitment that most teams require.

Also in 2004, the Bombing Madd Fatties came onto the scene. BMF won silver in their first year, and added a bronze in 2006. In their second season, BMF was sponsored by Wham-o, a move which required a change to their infamous logo. Christian Hajok adds:

“In 2006, Fatties went to WUCC in Australia with a much less talented roster and beat the #1 seed in the world, who hadn't been beaten that season I believe and certainly was unbeaten at Worlds, in the round of 16, but lost in the next round to the eventual silver medal team.”

Starting from a league team by the same name, MONSTER formed in 2007. Well, not really. MONSTER was going to local tournaments as early as 2005, but 2007 was when they got serious. Peyton Leung announced this transition in a post on the TUC BBS:

“We are building a fun and competitive coed touring ultimate frisbee team with a goal of contending at WUCC 2010. This is a new team where we hope to play and develop together over time, so everyone is welcome to try out.”

Compared to most teams, which are formed with the intention of being competitive immediately, MONSTER's idea was a little different: a four year plan to start with a group of friends, add promising applicants, and keep that roster together with minimal changes from year to year.

Although MONSTER turned in consistently solid results (finishing 6th, 6th, 7th and 6th in 2007-2010), they were unable to crack the top three finish required in 2009 to achieve their long-term goal of reaching WUCC 2010.

MONSTER has also made forays into the UPA Championship series, and in the fall of 2010 a number of MONSTER players joined with players from Guelph's MuD to form Milton for this same purpose.

In the Open division, GOAT, Grand Trunk and Roy had pooled forces in 2005, a couple of years after GOAT had formed. On the Women's side, Lotus had come together in 2004, and Lily was being added in 2006, restoring the partnership briefly started with Urge and Surge. 2006 was also the off-year between Bodhi and Big Hammers, and the year before MONSTER formed. It was perhaps inevitable in 2006 that BMF would join up with Zen and MMV to form a Mixed club system. Blue McClellan recalls:

“2006 was the first year of the three-team club system, as that was the year the Ultimate Experience ran tryouts for Fatties, Zen and MMV together, managed finances for them, etc. 2006 was a golden year for the UE Mixed division, in part because we had no competition for players.”

The leaders of BMF moved on after 2006, but new leadership came on board for 2007, calling the team Snipe. There was another changing of the guard for 2008, with the captains of league team COOL (see the “League History” page for details) taking over and bringing another new name, Tundra, which has stuck through 2010. The club system has remained in place through these changes, with players moving up from MMV through Zen to Tundra over the past years, but has yet to produce the CUC medals enjoyed by GOAT and Lotus.

With TUC leagues being primarily co-ed, and the proliferation of Mixed tournaments around southern Ontario (about a dozen over the course of the summer and early fall means there is a tournament option within a 4 hour drive of Toronto almost every other weekend for six months), it has become very easy and popular in recent years for league teams to attend local tournaments, generally with addition of a few friends from other teams. There are far too many such teams to mention, but teams from MAB to MONSTER have followed this path in transitioning from league play to success at the national and international level.

One other team that deserves a mention is Rotterdam. Rotterdam formed in 2004, mainly from players left out in the transitions of Urge into Lotus and Pong into Roy. While it has been relatively common in other cities (Ottawa, Waterloo and Quebec City in recent history) for there to be significant migrations of groups between single-gender and co-ed teams, this appears to be the only such substantial movement in Toronto history. Rotterdam finished 16th at Nationals in 2004 and did not return in 2005.

While Toronto Mixed teams have not enjoyed the same level of success as their Open and Women's counterparts, showings like the silver-bronze combination of BMF and Bodhi in 2004 demonstrate that Toronto has plenty of co-ed talent. Many have suggested over the years that more success could be had if the top talent were combined on a single team, as happened with the Y.E.S./Rebellion/ Nerve/Redi situation in Open between 1999 and 2002 that resulted in GOAT, or the similar Urge/Ruby Cruz merger in Women's in 2004, resulting in Lotus. Each of these happened 25 years after the division officially appeared at CUC, so by that timeline we should see something similar in the Mixed division for the 2014 season… 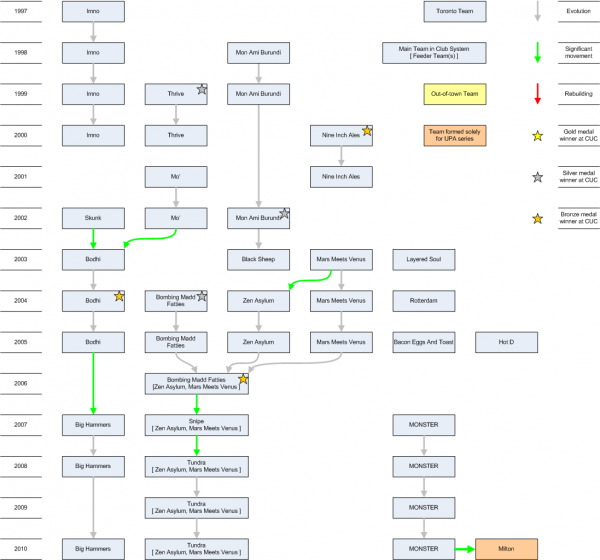