2013 Volunteers of the Month 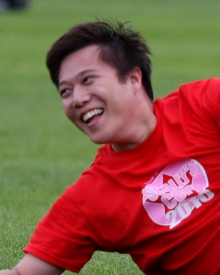 Lawrence Wong is the 2013 January Volunteer of the Month. Lawrence has been a TUC member for over 5 years and he has always been an active member, captain, and team builder. He started convening TUC leagues in 2012 and is currently the convenor for Tuesday Indoor League at Monarch Park. Lawrence is great at producing timely schedules and communicating regularly with his captains. He also regularly provides feedback to the Club on fields, leagues, etc. and he has volunteered at various Club events.

TUC thanks Lawrence for his hard work and dedication. Wanna be a great volunteer like Lawrence? Drop us a line at volunteers@tuc.org 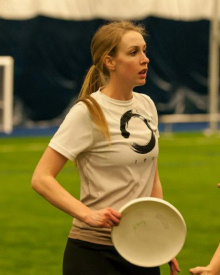 Monica Taylor is the 2013 February Volunteer of the Month. Monica has been a huge help with both of TUC's February events. She was instrumental in helping the Superbowl Tournament function well on the night, teaching DDC to the participants, time keeping and score keeping, all whilst playing and earning herself MVP! On Family Day, Monarch Park held an activities day, where kids could come along and learn about a few different sports. Monica did a fantastic job teaching all the youngsters about ultimate and stuck around from 8:30 til 4:00 never taking a break from the swarms of kids wanting to know how to throw.

TUC thanks Monica for her hard work and dedication. Wanna be a great volunteer like Monica? Drop us a line at volunteers@tuc.org 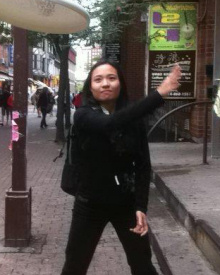 Hazel Tenefrancia is the 2013 March Volunteer of the Month. A member of TUC since 2009, Hazel recently submitted several design proposals for the new TUC logo. Throughout the month we went back to Hazel and requested numerous design variations, colour schemes, and formats to help us make our decision. Each time she was up to the task! The result is a clean and crisp new logo for TUC that we are proud to call our own – keep your eyes open for our new TUC logo coming soon! Hazel has further volunteered her time to produce new letterhead and background image designs for the Club.

TUC thanks Hazel for all her efforts in supporting the Club! Got a skill-set you want to share with TUC? Contact volunteers@tuc.org 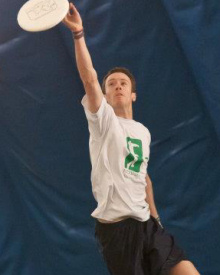 Rob Grundy is the 2013 April Volunteer of the Month. Rob has been awarded Volunteer of the Month for his work with the TUC Juniors. He has done a fantastic job as one of our regular coaches at the Thursday Juniors League. Thank you Rob for using your spare time to teach the youngsters how it is all done. Each week Rob takes the Juniors through an array of drills, then helps them utitlize their new skills in game. He has a good eye for the mechanics of ultimate and can break down the skills in an easy to understand way so that no player misses his coaching cues.

Rob is also a TUC league mainstay. Congratulate him if you see him at league, he plays multiple nights every season, so you are likely to run into him!

TUC thanks Rob for his coaching and time. Want to volunteer with the club? Drop us a line at volunteers@tuc.org 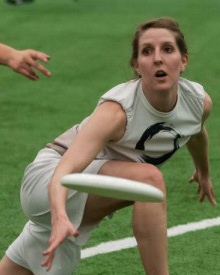 Nadine Steenhoek is the 2013 May Volunteer of the Month. Nadine is the recently appointed Social Committee Chair for 2013. Coming on board with short notice and getting to work straight away, Nadine has done a fantastic job putting together the 2013 Summer Kick Off Party. She was responsible for booking the venue and all the logisitics involved, organising the games, equipment and volunteers building and maintaining relationships with new and old TUC partnered venues. Always ahead of the ball, she ended up putting together a great event with in the Kick Off Party in a very small time frame. She is already thinking about the next TUC event and has put her hand up to help with our other events.

Keep an eye out for the next TUC party, with Nadine on the case, it will be big.

Nadine is also a touring player with Zen. Congratulate her if you see her at league, or any upcoming tournaments!

TUC thanks Nadine and her event planning skills. Want to volunteer with the club? Drop us a line at volunteers@tuc.org 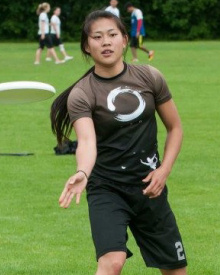 Mei-linn Chuong is the 2013 June Volunteer of the Month. Mei-linn put her hand up to volunteer at this year's Summer Experience. Not only did she volunteer for both days, she also ended up coaching and leading the Hat Team. She did such a great job of teaching all the players they even managed a 5th place finish!

Mei-linn showed up early each morning to help set up and stayed at the end to pack up. She coached and played with the Hat Team, but always found time in between games to do some extra volunteer duties without ever having to be asked. Thank Mei-linn when you see her, as she is great example of a great volunteer. Members like Mei-linn help make the TUC events run very smoothly.

Mei-linn is also a touring player with Lotus this year, after playing Zen in 2012. Congratulate her if you see her at league, or any upcoming tournaments!

TUC thanks Mei-linn and her efforts at the Summer Experience. Want to volunteer with the club? Drop us a line at volunteers@tuc.org 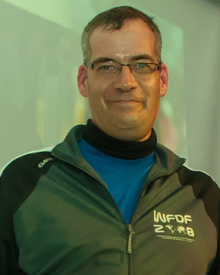 Tony Charbonneau is the 2013 July Volunteer of the Month. Tall Tony has been a major asset to club over the last week and a half, tirelessly working at the WFDF World U23 Championships. Tony even started helping us out before the tournament started, going up to the York University campus to lend a hand early. Each day, he was one of the first people to check in on campus and one of the last to leave. Ever reliable, Tony was doing it all from assembling player packs, team registrations, field setup, score keeping, time keeping, clean up and everything in between. There wasn't a job that we couldn't give to Tony or a moment where he couldn't give us a smile.

TUC thanks Tony and his tall efforts at Worlds. He was definitely a savior for the Tournament organizers at times and huge force in the volunteer crew. He also played a great leader for all the part time volunteers that cycled through for the week. Want to volunteer with the club? Drop us a line at volunteers@tuc.org 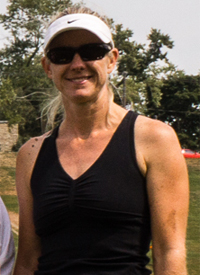 Marianne Long (Perko) is the 2013 August Volunteer of the Month. Over the past couple of years Marianne has been instrumental in helping the development and growth of Youth ultimate in the city. She has assisted coaching at our Southeast Youth leagues at Riverdale Park and was a main contributor helping out at our Youth End of Summer Celebration day on August 25th and ensured that all the kids stayed cool by bringing a cooler full of freezes for all to enjoy.

A big thank you to Marianne for all your help. Want to volunteer with the club? Drop us a line at volunteers@tuc.org 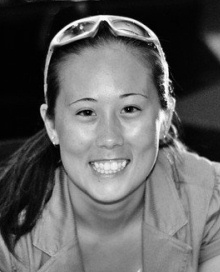 Andrea Kurahashi is the 2013 September Volunteer of the Month. Andrea has consistently been the first to volunteer her time to almost every TUC tournament this year. Starting with mentoring in the Spirit Hat back in May, Andrea finished the tournament season with an impressive 19 hours of volunteering dedicated just to Playoffs. She is a very reliable person who is there for start of set up and the last bit of pack up with everything in between. Andrea is also a strong player herself and is a mainstay in the Toronto women's touring scene with Lotus.

TUC sends out a big thank you to Andrea for all of her help. Want to volunteer with the club? Drop us a line at volunteers@tuc.org 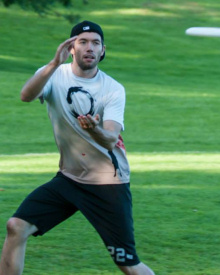 Kieran "Ki-Ki" Bol is the 2013 October Volunteer of the Month. Kieran put in a big effort at the Monarch Park dome setup, despite weather conditions the day before that seem to work against us. The day of was not a pleasant day to be outside either, but Kieran did it with a smile as he always does. He spent his whole day on the field doing some heavy lifting to get the dome set up in time for the first Fall Indoor games.

We would also like to recognize Kieran for helping out around tournament HQ at Summer Playoffs.

TUC thanks Kieran and his efforts. Do you want to help out the club? Send an email to volunteers@tuc.org 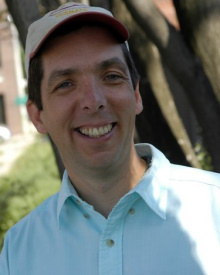 Thomas Meyer is the 2013 November Volunteer of the Month. Thomas is also the first Volunteer to have received Volunteer of the Month recognition twice! But we could just not go past him, with all the hard yards he has continued to put in, on the fields and behind the scenes. Thomas is TUC's main junior leagues convener and has been with the juniors program for many years. He lends so much of his experience and time to all the up and comers. Chances are the last young player to school you was taught by Thomas. He was also a very reliable part of the team at U23 Worlds, clocking up some of the highest volunteer hours.

TUC thanks Thomas and his efforts. Do you want to help out the club? Send an email to volunteers@tuc.org 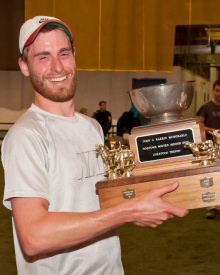 Dan Clubine is the 2013 December Volunteer of the Month. Dan always likes to lend a hand where he can and thankfully he did with the recent TUC office move! He helped us in a tough morning of lifting, dismantling, figuring out how to get odd shapes through doorways and some intense Tetris style packing of the truck. The day went smoothly thanks to Dan and a few great volunteers.

Dan is known to be a very reliable volunteer throughout other TUC events each year, often volunteering full time for the days he isn't on the field and helping during his breaks when he is. Most recently, he put in big days at the TUC Summer playoffs. Dan has been with the club since 2007 and he is a mainstay in all the leagues. Congratulate him after he gets that D on you!

Want to get involved like Dan? Send an email to volunteers@tuc.org